Dabble’s Story Notes section is the best place to store all your untidy, unruly, unorganized thoughts and feelings about your book.

Written by Jacob Wright
Updated over a week ago

Think of the Story Notes section as a wiki-page. Its free-form design has folders and files to contain your Notes, as well as any problematic, half-baked Chapters or Scenes not ready for your Manuscript. It’s THE destination for all the unfinished ideas you have for your book.

When you first open a new Dabble project, there are two default Folders: Characters and World Building.

To add Folders, click the Plus (+) from the left-hand nav menu or click on the three dots to the right of any element already under the Story Notes section. 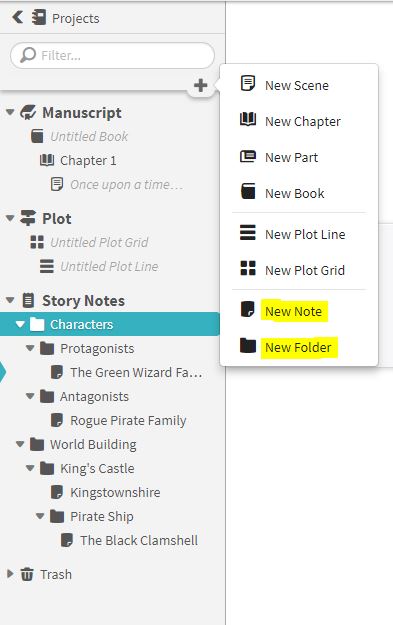 Add more Folders as you please, and stack them under Story Notes or nest them under the existing Folders. Here’s an example of stacked Folders vs nested Folders. 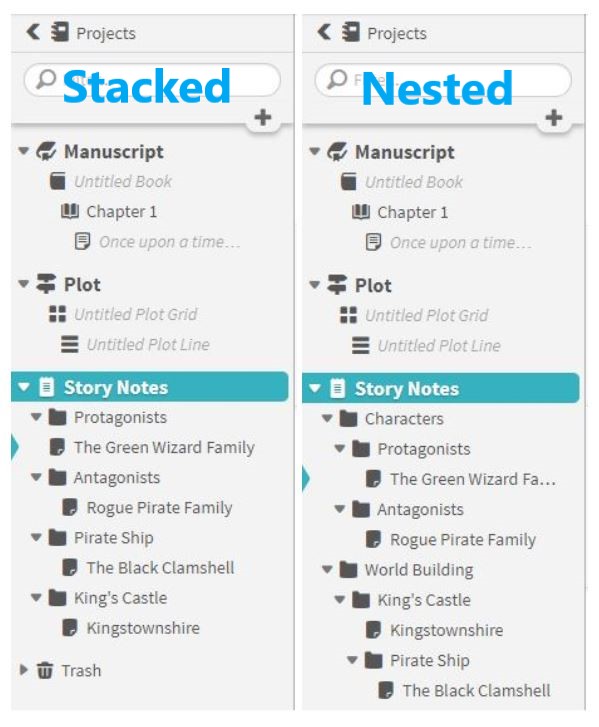 Create a Story Notes folder system that makes the most sense to you. This section is a little bit of your brain put down on paper, so run wild! They also collapse by clicking the down arrow, perfect for when you don’t want your Folders and sub-Folders and files staring at you while you work.

Notes are notes, clearly. They hold your actual written-out thoughts or streams of consciousness. To add a Note file, follow the steps for adding folders… only click “Note” instead of “Folder.” Naturally!

Now that you’ve added a new Folder and a new Note, rename them. Double click on the name either on the actual page, or in the left-hand nav menu.

A Note on Style

Since you’re mostly jotting down notes here and not writing a straightforward paragraph containing an epic character speech, Dabble has some cool list functions to keep you organized.

Type “1.” and hit space to start a numbered list.

Type an asterisk “ * ” and hit space to start a bulleted list.

Type a dash “ - “ and hit space to also start a bulleted list. 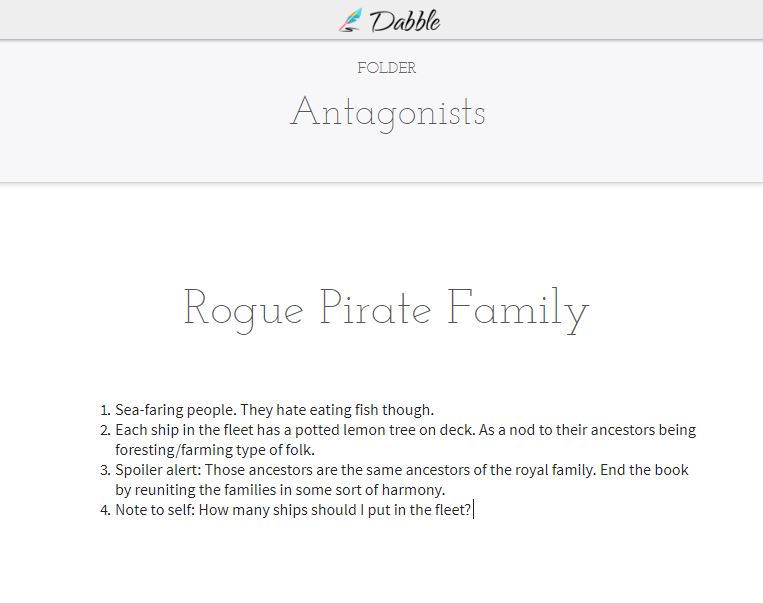 Use numbered lists, bulleted lists, paragraphs, or line breaks interchangeably on the same Story Note. Say you start a bulleted list, but want to end if after 4 points, just hit enter a few times and you’re out of list mode. You’re free to write a bit of dialogue for your antagonist while referencing a bulleted list of their grievances on the same page! See, free-form!

Pro Tip: All the normal shortcuts for things like Bold and Italic work in the Notes section as well. 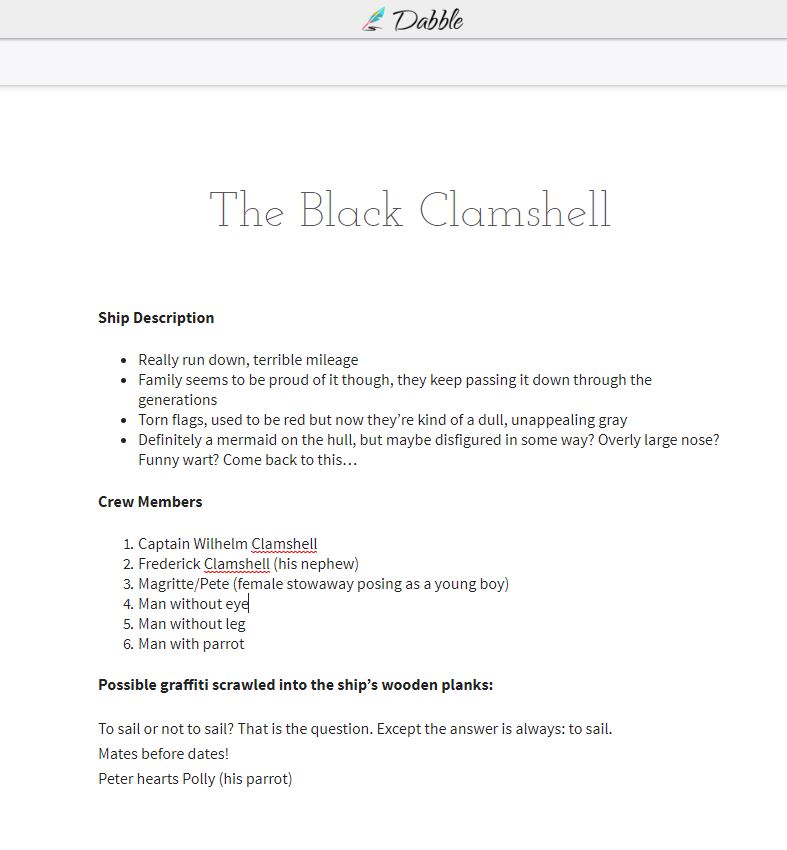 A Note on Space

The final frontier! Just kidding, not that kind of space (unless your story is about space). Story Notes have virtually unlimited writing space, just like your book. Make them as long or as short as needed. The page also typewriter scrolls up as you type, just like everywhere else in Dabble.

Just like in Manuscript View (where you can view your whole book by scrolling with your mouse) click on Story Notes from the left-hand nav menu to view all your notes with just a scroll. The Folders are designated with gray backgrounds. 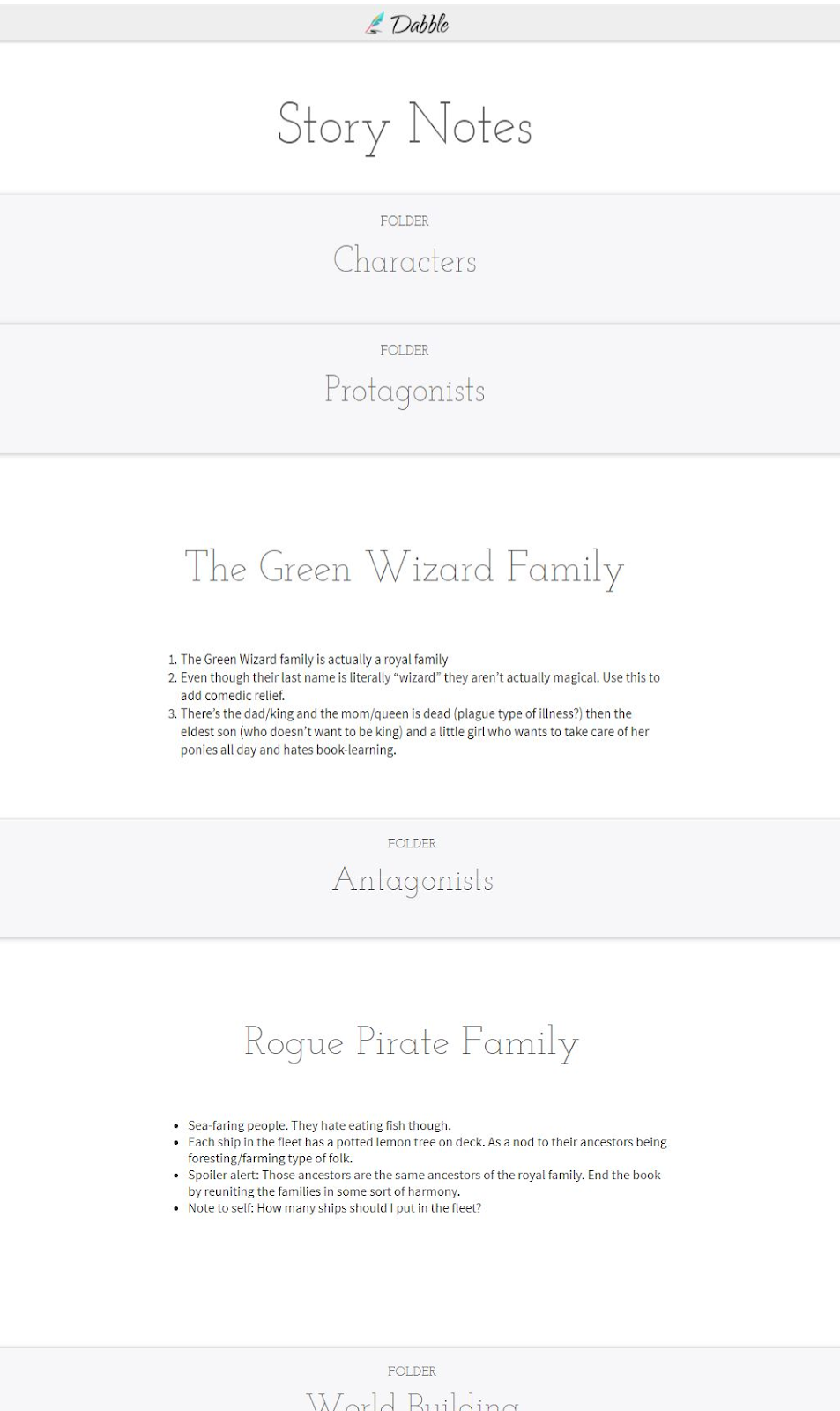 A Note on Chapters and Scenes

See how Chapters and Scenes are housed under the Manuscript section on the left-hand nav menu? That’s where they belong. *Record scratch* Wait just a minute! Dabble’s Story Notes hold ALL file types: Chapters, Scenes, Folders, and Notes, even Plot Grids and Plot Lines.

We recommend moving problem Chapters and writer-blocked Scenes to Story Notes where they sit in draft/time-out mode instead of in your perfectly crafted and very polished book.

And that’s how you add Notes in Dabble! If you have a particularly creative way of keeping Notes, we’d love to see it. Post your Note style in the Dabble community forum to inspire other writers.

Did this answer your question?